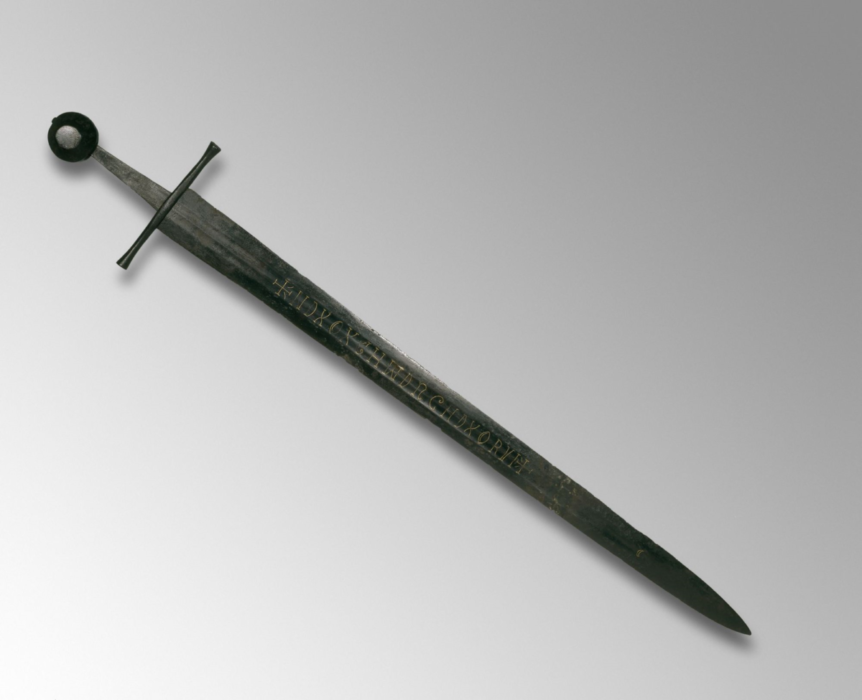 This sword contains a mystery inscription, and scholars at the British Library are looking for an answer. The letters, clearly displayed in Roman script, read:

This is an interesting riddle, and one I'd enjoy trying to solve if I had more time and inclination at the moment. Based on research I did at Cambridge during my Masters, I have a hunch about where and how to find the solution, so I thought I would share some of my experience in the hopes that it will help someone more learned or more industrious (or both) than I in solving the mystery of this sword.

My hunch is that this inscription represents an abbreviation of a prayer. As indicated in comments on the British Library blog post, ND may stand for Nostrum Dominus or Nomine Domini, which both could be openings for a prayer in Latin. This form of abbreviation for prayers is common from earlier in the medieval period, but poses several complexities I shall discuss below.

In Old English, there are a series of poems and prose works known as Solomon and Saturn, wisdom dialogues between the representative of pagan wisdom, Saturn, and the representative of Christian wisdom, Solomon. In case you're wondering, no, it doesn't matter that Solomon is from the Old Testament â€” there is a lot of syncretism in Old English Christianity. In the poetic dialogues, Solomon and Saturn discuss the power of the Pater Noster, the Our Father prayer. Solomon goes through each of the letters of the prayer in an abbreviated form and explains how each combats and defeats the devil.

The abbreviation of the Pater Noster is found in several different forms across medieval Scandinavia. More than 30 are attested in different forms, many in runic script. Consider these two examples:

Both of these abbreviate the Latin prayer. Most or all of the first two words is spelled out, but the rest of the prayer is abbreviated haphazardly. One must also consider that both of these were originally written in a runic alphabet, so the k in the Gol inscription stands in for the Q in qui es in caelis. Here is the Latin prayer in full:

Once you get past the first two words, things start to break down, and there is no clear process for selecting the remaining letters of the abbreviation. In the case of Solomon and Saturn I, the letter L comes before C in the abbreviation, but not in the prayer; letters don't have to start words or phrases to be included in the abbreviation, and the lack of standardized spelling means you might have letters standing in for other, more expected forms.

Within Solomon and Saturn I, the use of the prayer for protection in battle is clear:

Additionally, evidence for the power of letters inscribed on a weapon is also explicit within the poem, though through a more sinister example. The devil has evil abbreviations on his own blade:

All of this, as well as other impressions one gets from years studying medieval heroic literature and military traditions, leads me to believe the mystery inscription is an abbreviation to a prayer. In fact, I'd be surprised if it is not a prayer of some kind. There are several questions that make the search for the specific prayer very difficult indeed:

It's because of these and other similar questions that solving this riddle is a true challenge, even for experts in medieval studies. One must take into account a huge amount of linguistic, archaeological, historical, and even metalurgical knowledge in order to narrow the field of questioning. Furthermore, in order to provide any meaningful proof, a text of the original prayer from the time and location of the sword's provenance must also exist in some other medium.

It'd be easier if the sword just read NÃ¦gling, Balmung, or Gramr, but that wouldn't make for much of a mystery. Hopefully the above discussion will help in others searching for an answer, or at least be interesting and edifying.

NB: I did my MPhil at Cambridge University in Anglo-Saxon, Norse, and Celtic, and my PhD at Cornell University in Medieval Studies, focusing on Germanic heroic literature of the middle ages and historical linguistics. While I have not done much research on the topic of inscriptions on blades nor on this particular inscription, I'm also not just pulling this stuff out of thin air. I say this because of several well-meaning, but far from accurate (or possible) comments on the British Library page and elsewhere.