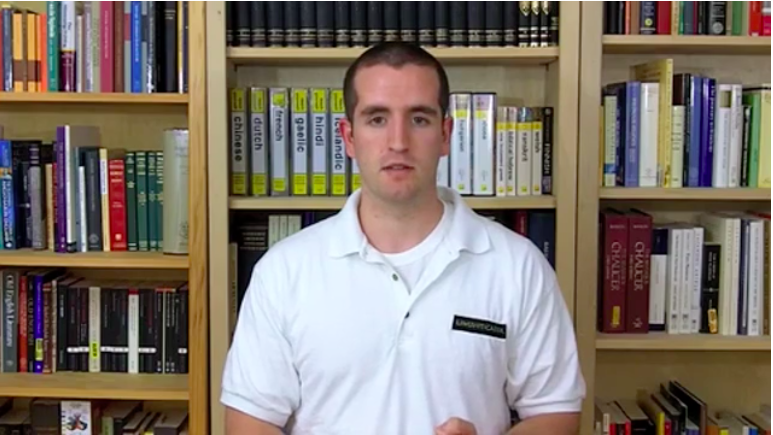 I've just had a question that's come up many times before: What are all the books in the background to the Linguisticator video course? 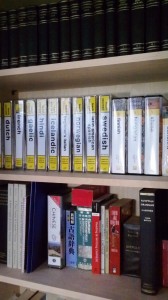 Most of the books have something to do with language in one sense or another. The bookshelf on the left-hand side of the video is filled with books on Germanic philology. Up top is Old and Middle High German, as well as Gothic and Old Saxon. Old English follows on the next shelves, then Old Norse and Icelandic. Some gems of the collection include Eduard Sievers's edition of the Old Saxon Heliand, Bosworth and Toller's Anglo-Saxon Dictionary, and of course, my leather bound edition of Klaeber's Beowulf, which I received as a gift from my undergraduate advisor.

The collection continues in the middle column with the top shelf completely filled with a handsome leather bound collection of all the ÃslendingasÃ¶gur (Icelandic Sagas), as well as the three volume set of the FornaldarsÃ¶gur (Legendary Sagas from Iceland). If you don't know the Legendary Sagas, you definitely know things based on the legendary sagas: Wagner and Tolkien both drew heavily on them, and they are fantastic tales.

Beneath that collection is a shelf filled with books from the Teach Yourself language series. Despite its placement in the videos, I don't want you to get the sense I'm endorsing the books too strongly. It's a solid series and valuable for several reasons: the books are easy and inexpensive to obtain, come with accompanying audio materials, and are generally of a decent quality for an early stage in the language learning process. You can almost always check them out from public libraries, but being the language (and book) nut that I am, I enjoy building a personal library. Some of the teach yourself books are better than others. Latin American Spanish, for example, is on the better end; Teach Yourself Icelandic is less helpful. These really are beginning books, too, and only really work as supplements in combination with a thorough understanding of a language's structure and patterns.

Beneath the Teach Yourself books are many more language books and grammars, organized alphabetically by language name. Some favorites include the course materials in Classical Japanese I used in grad school, a Grammar of Ancient Egyptian I bought as a present to myself after completing my exams at Cambridge, and the Lewis and Short Latin Dictionary I purchased for $4 at the "Friends of the Library" booksale in Ithaca, NY while a student at Cornell. I went at 3 in the morning to line up for entry, and scored some great deals (Lewis and Short is normally $150 used). Also in this section are grammars of Hawaiian and Zulu, and an edition of the Brother's Grimm Fairy Tales in Faroese.

The section of grammars spills over into the third column on the right-hand side of the video, where I then have some works from later literature, including my Middle English books (Riverside Chaucer, editions of Gower, etc.).

I do have books not related to language (I have a lot of books), but I thought this library would serve a nice background to the course.