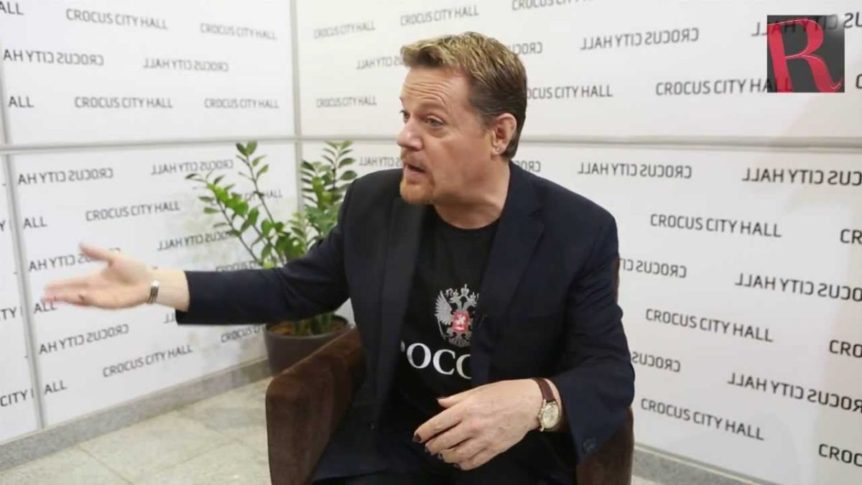 A few days ago I had the pleasure of seeing Eddie Izzard perform live in Cambridge. It was an added pleasure to see his performance in both German and French.

Eddie izzard is campaigning against Brexit, and he is using language as one of his key tools. He has been performing three shows in three different languages on the same night. By the time I heard that he was coming to Cambridge, his English show was completely sold out (apparently it sold out within the first hour or so). This is where it pays to speak other languages!

I've been a fan of Eddie Izzard for a long time, but have only seen clips of him on YouTube. He has some fantastic sketches about history and language. Since I speak both German and French, and tickets were available to both shows, I debated at first which show to attend. Then I decided that it would be fascinating to go to both the German and the French, and be able to compare.

Unfortunately, none of my German-speaking friends were available on the night, so I went to that show on my own. The performance was at the Junction, a small and intimate venue on the south side of Cambridge. I ended up sitting dead center in the front row.

Eddie, who is a transvestite, came out in heeled boots, jeans, and a blazer, with painted nails and eye make up. He launched straight in in German, and it soon became clear that while he had rehearsed his show, it was not scripted. I found this very impressive - he knew what he was going to talk about, and what jokes he was going to make, but the actual sentence structures were not memorized.

Topics ranged from human sacrifice, to Martin Luther's 95 theses, to the ridiculousness of the sport of dressage. It was clear that Eddie still struggled with the German language a bit, and was not as comfortable in it as he was in English or in French. He made several "errors" when it came to genders of words, and declining for cases. Once or twice he had to stop and work his way either through a conjugation or sentence structure, throwing the verb to the end.

These "errors" became part of the show itself. No one cared that his German wasn't "perfect" - everyone was just having a good time. We all knew he wasn't a native speaker, and he pushed on through the performance and through the language with a refreshing boldness. Learning another language is challenging enough, but performing in that language - and, indeed, performing comedy - is incredibly impressive. The pressure is on, and when we are nervous or stressed in some way, our linguistic performance can decrease substantially, even when there is strong underlying competence.

A friend of mine joined for the French performance, and we sat through the same progression of topics as had been performed in German. It was immediately clear that Eddie felt more comfortable in French, and though we heard many of the same jokes, they were embellished and expanded. He added more details and extra lines of dialogue in the French version. Presumably, he can speak faster in French, and with the greater fluidity he was able to add more material to fill the same amount of time.

At one point, Eddie acted out a scene in which Martin Luther nails each of his 95 theses onto the door of the church one by one. This contained a joke in German that would not translate into French. When the wind picks up, the theses start blowing all over the place, and Luther loses number six. Playing Martin Luther, Eddie dismissed this loss with a wave, saying, "Sechs war scheiÃŸâ€¦" This is, of course, a play on words, sounding essentially the same as, "the sex was shit."

After the first performance in German, the couple next to me said they were really curious to see the French version, and know how he handled this scene and these jokes. The answer was simpler than I expected - the whole Martin Luther scene was still in German in the French version! Eddie himself stopped and commended the educated Cambridge audience for being able to understand this German section within the French performance. Everyone had laughed.

Comedy is one of the most difficult aspects of a language to learn, and Eddie himself spoke about this after the German performance. In comedy, you have to be able to understand the punchlines, which means you absolutely have to have both the grammar and vocabulary, as well as cultural reference. A lot of comedy relies heavily on reference to very specific cultural phenomena. Eddie Izzard's performances work in multiple languages in part because he tends to limit his references to phenomena within world history, or in pop culture widely recognized across countries. The other reason his comedy works in multiple languages is because it is very physical, and he acts out the ridiculous scenes and interactions he portrays.

Had I not spoken German or French, I would not have had the opportunity to see Eddie Izzard perform live. Nor would I have had the pleasure of comparing the German and French performances. Doing three shows for three different audiences on the same night is impressive enough - doing it in three different languages is bordering on insane! I have enjoyed Eddie Izzard's comedy for a long time now, and I have more respect for him than ever before after seeing him perform live.

This was not part of his performance in Cambridge, but is a brilliant commentary on the Latin language.