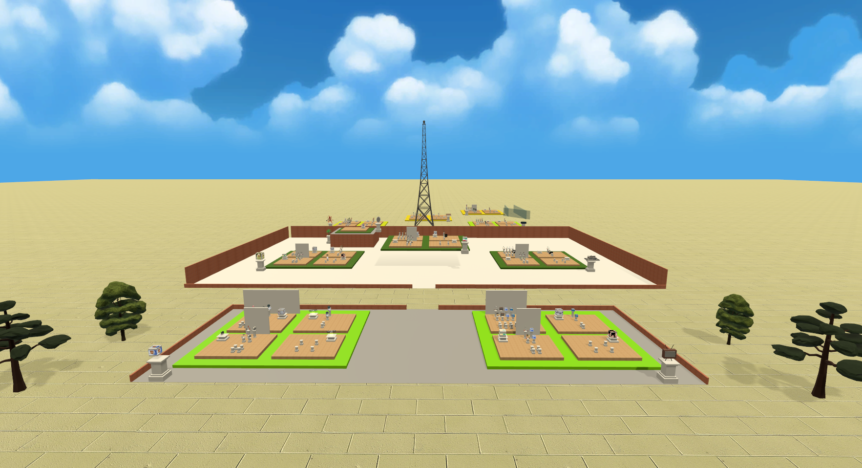 I woke up the other day thinking about robotic snakes and tigers. They were fighting in a tournament at Windsor Castleâ€¦ They were mnemonics, of course â€“ part of a memory palace students at the Perse summer school in Cambridge had created to learn French grammar. This was the first time using Macunx VR in a classroom, and the first time taking students â€“ some as young as 10 â€“ through a large and complex guided module. It was one of the most incredible things Iâ€™ve seen. The results were impressive: many of the students learned all the verbal endings of French in just four days.

â€œWhat is the â€“ir conjugation, subjunctive, imperfect, singular, third person ending?â€ A short pause follows as students locate the object in their minds, checking to make sure they have heard the instructions correctly. I can see them going first to the area for the conjugation, then the verbal mood, then to the column for the imperfect, the pedestal for the singular, and the position for the third person. â€œI with a hat, T!â€

We ran the same week-long intensive twice with two different groups. The goal of the course was to teach how to use memory palaces and to learn as much French as possible. We spent the first four days using the desktop version of Macunx VR projected onto a screen at the front of the classroom. I would control movement through the space and add mnemonics where appropriate. On the fifth and final day, I brought in VR equipment and we explored the spaces we had built. Before building the memory palaces, I went through our maps (all the students had handouts) and explained how the content worked in French.

I was not sure how things would go the first week. There were a couple of challenges beyond just figuring out the best way of presenting the memory palaces and Macunx VR. We actually had really hot weather, and â€“ this being England â€“ the classrooms were not air-conditioned. So, we had a hot classroom and the session was run in the afternoon after lunch. We also had an interesting mix of students, ranging in age from 10 to 15. That's quite a big gap in age and experience. Without any warning, bickering could break out at any moment between the younger and older students. Nonetheless, the students generally got along well with each other and it was definitely better to have everyone shouting to participate, rather than slumped dully in their chairs. Although we focused on French, we also explored other aspects of using memory techniques; I showed them memory palaces for learning to count in Turkish as well as for learning the American presidents by number.

During the first week, I learned a lot about how best to use the software in the classroom, so we were able to move much faster the second week. Unfortunately, there were only two students in the second session â€“ but their success was truly incredible. They learned the entire regular and auxiliary system of French verbs in just 4 days (3hrs a day). That includes every ending for the three regular conjugations, the formation of the passive and reflexive, all the forms for Ãªtre and avoir, as well as the forms for the other main modal verbs: devoir, pouvoir, vouloir, and aller.

I wanted to share some of my experiences and learnings for how best to use Macunx VR in a classroom, particularly when you are trying to get all the students to join together in creating the same memory palace.

One thing I would do differently in future intensives is to start with small memory palaces that are fully built out with all their mnemonics and stories. In my experience, it is far more effective for users to create their own mnemonics and their own stories. But this can be difficult if you have never seen an example of a memory palace. By showing a few full examples of memory palaces â€“ even if the mnemonics do not work for the students â€“ it will give them an idea for what a memory palace really is and how to use one.

Make sure mnemonics are visual. For French, itâ€™s important mnemonics show the letters to be remembered. Mnemonics also need to be distinct and memorable.

I like to start by explaining the topic itself (e.g. French articles), then explain the way the space is set up in the memory palace, and then start creating mnemonics. The final step is to create a story. After that, itâ€™s about testing recall and practicing usage.

The Importance of Story

When creating a large memory palace, such as that for the verbal system of French, the narrative element becomes really important. You need to have a story that connects all the parts and pieces together â€“ otherwise the space itself becomes overwhelming with all of its images. Creating these stories, however, is a skill in itself. The first time around, students often make several major mistakes in creating their stories. Perhaps they put mnemonic elements into the story out of order, or maybe the events of the story are too bland in order to stick in the memory. Students need to be taught not just to come up with random actions, but to connect mnemonics with a story that includes details of what, why, and how. Avoid quick-fire chain reactions. Make students start with what happens, but then add the why and how for each stage. Adding when and where is bonus.

Building Memory Palaces in a Group

Just opening up the floor to suggestions for mnemonics can create mayhem in a classroom. Some students will shout out suggestions, and sometimes fighting erupts over which mnemonic to use. For creating mnemonics, I tried splitting the class into groups and assigning them elements. For example, Group 1 would create mnemonics for the first 10 endings, and group 2 would create mnemonics for the second 10 endings. This worked okay, but was not great. It was difficult to supervise the mnemonic creation, and this meant that we had to later change several of the mnemonics that were not really good enough.

A much better method for co-creation is just to go around the room. Make sure everyone accepts that they will have their own turn and everyone else must accept each other's choices. This worked really well, and when some students were stumped, others could join in. It also meant that I could offer suggestions and corrections if a student proposed a mnemonic that wouldn't really work for memory. This kind of format also worked for creating stories. For example, the first student decides what the connection would be between the elephants and the Spanish flag, and the second student then connects the Spanish flag to the other elephant. You can then daisychain a story together; everyone participates, and everyone is on the same page at the same time.

The workshops using Macunx VR were both really fun and really effective, even just using the desktop version of the software projected onto a screen. Students didn't need to be in virtual reality very much at all in order to develop their spatial awareness within the memory palace. Even with the heat, students were so engaged, keeping the kids from shouting out narrative options and actually over-participating became the challenge! Good trouble to have.

One thing that I already knew going into these workshops was that students donâ€™t have to understand everything at first before they build a memory palace. For example, they just need to know there is a subjunctive, then learn the forms in a memory palace; later they can learn how the subjunctive works when they see it in action. In fact, itâ€™s far easier to learn how it works when youâ€™ve already learned the forms. One of the students in the second section had a lightbulb moment with the passÃ© composÃ©. Although I had explained that the compound tenses all just used forms of avoir with the past participle, it wasnâ€™t until the student had learned the regular endings and learned avoir that he then really grasped this. He was looking at the tables and it suddenly clicked â€“ since heâ€™d done the simple forms and learned avoir, he saw that he had everything he needed to form the perfect tenses.

Building memory palaces in groups or in a classroom environment can be challenging, but if done properly it's really effective. In leading a group, there are several options for how to go about doing it. You can co-create a memory palace entirely from the ground up, allowing students to both choose mnemonics and create their own stories. Alternatively, you could use preprepared mnemonics and only allow students to create their own stories. This is what we actually did in the second workshop, because we reused the mnemonics the students had created during the first week. Once students understand what a memory palace is and how it works, they can be turned loose to build memory palaces on their own. Many students requested being able to go through the 3D spaces and add their own mnemonics.

The experience of running these intensives has led me to consider creating some super guided modules for popular complex subjects like French verbs. These would be memory palaces fully filled out with mnemonics and equipped with stories. I would try and choose mnemonics and narrative elements that would appeal to the widest range of people. This way, users can see exactly how the memory palace works. And if the mnemonics stick, they can just keep them. Otherwise, students would have the option of changing the mnemonics or changing the stories. I don't really like supplying mnemonics because creating them yourself is an important part of the process and makes the memory much more powerful; but I have seen that providing mnemonics is necessary for students in the early stages so they can see how a memory palace works.