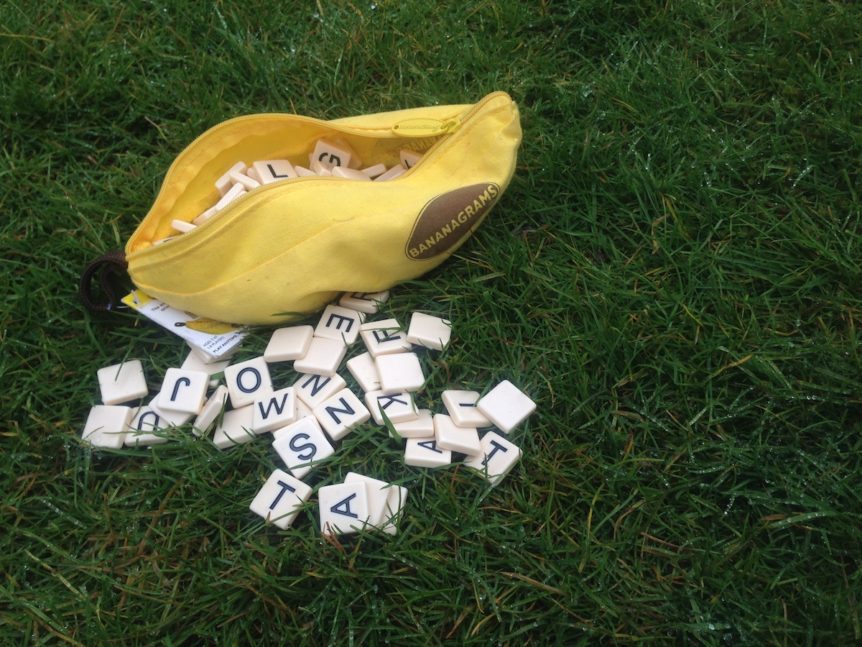 Let it be known that I am not a Scrabble fan. My heart sank a little when my friend poured her Bananagrams tiles out onto the table in front of me. So similar to Scrabble pieces in size and feel, these little tiles were bringing back unpleasant memories of Scrabble games for me, of games that would go on and on for hours while people debated whether or not 'za' was a real word.

Let it also be known that I am now unashamedly addicted to Bananagrams. I'll play it anytime, anywhere and with anyone. I wouldn't play it on a plane though - I am well aware that that could be quite messy. This fast-paced word game is great. I played it once, loved it and was hooked in no time at all. In fact, three games down and I had already bought my own set on Amazon.

The tiles start face down on the table and each player takes between 15 and 21 tiles depending on how many are playing. As soon as everyone's ready, someone shouts 'split', the game begins and people turn over their tiles. I think you can easily root out a rookie Bananagrammer - their tile-flipping technique is just not there. Mine is speedy - I've had years of practice. You have to create a Scrabble-like word grid in front of you as quickly as possible. If you can't use all your letters, you can shout 'dump', put one letter back face down in the middle and pick up three more. This is supposedly a banana-themed game. Banana split, I get. Banana dump, I don't. Oh well. Who am I to pick holes in a game that is so great?! As soon as you've used up all your letters, you shout 'peel'. Peeling in Bananagrams can make or break you. It means that everyone playing has to pick up an extra tile. Great if you're stuck, need an extra vowel and happen to pick up that extra vowel. Dire if you get an X or a Q. The game carries on like this, with people dumping and peeling. You can change your grid as many times as you like during the game, so with every dump or peel you could build a new word or re-construct part of your grid. The trick is to make sure that you have enough space on the table to start with. This is the time to make sure that the personal bubble around you is as wide as possible. Nothing worse than wanting to build a long word and realising that if you do so, your grid will fall off the table. This is heart-breaking when it happens. So, does the game ever end? Yes! And a game of Bananagrams can last as little as ten minutes! If someone is about to shout 'peel' and there aren't enough letters left for everyone in the game to be able to pick one up, that person should instead shout 'BANANAS!' - they have won the game. This win still needs to be independently verified so their grid must be checked and checked again to make sure that all the words they've used are correct. Only then can you declare that you have won Bananagrams.

The world has gone somewhat Bananagrams crazy and I really think and hope it stays that way. I have written messages in Bananagrams tiles, taken a photo of my message and sent it off to someoneâ€¦only to get a reply back in Bananagrams tiles from an equally mad friend! There are Bananagrams competitions running in schools across the UK and I've even seen someone on YouTube propose during a game of Bananagrams. Watch it here.

My first few years of Bananagramming had been here in the UK so when I went to a bookshop in America, I was amazed by all of the Bananagrams products they had on offer. I could buy a double banana - double the tiles, double the fun. But perhaps even cooler than that was that I could suddenly see sets of Bananagrams in other languages! You can play the game in French, German, Hebrew, Italian, Norwegian and Spanish.

So, how can you use Bananagrams to learn languages? The games might be slower than in your native language, but it will get you thinking about vocabulary. It's a great way to consolidate what you already know, learn from your opponents and enjoy the language you're learning. I've tried playing against some of my Spanish friends. Going from whizzing through a game of English Bananagrams to poring over my Spanish word grid for over an hour was a humbling experience to say the least! However, I really felt it pushing my vocab skills to the limit.

In my (entirely necessary) research for this post, I've found out about a new Bananagrams product that is exceedingly dangerous for my Bananagrams addiction and perhaps for those people against whom I used to play Bananagrams and call my friendsâ€¦ There's a new Bananagrams game out there and this one means business. Bananagrams Party has Party Power tiles that mean you can destroy other people's word grids or mess with their tiles. I've no idea when or where this is coming out, but I can't wait! Read more here.