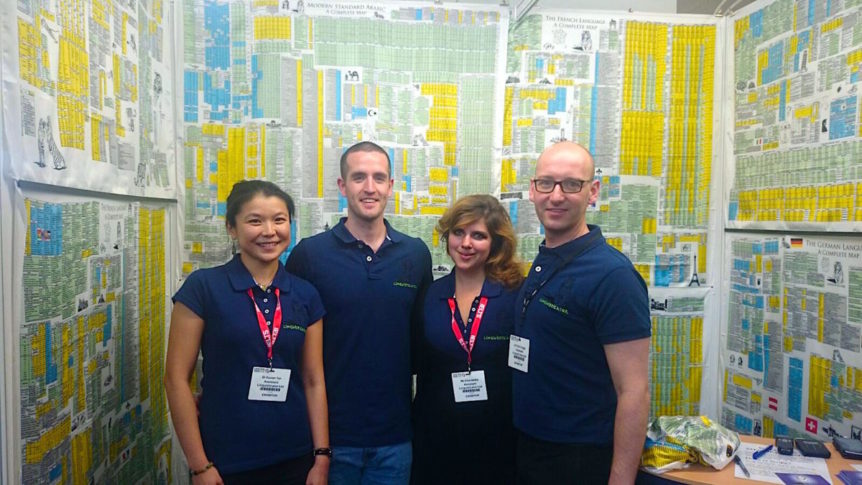 This past weekend was the 2015 Language Show Live in Olympia, London. I am still recovering physically and mentally from the exhaustion, and also still riding high from all the excitement and enthusiasm shown by teachers and students alike for our fabric maps and online programs.

Having spent much of the last few years in an office or library working to develop our language training programs, this past weekend was particularly meaningful. I rarely get the chance to witness people's initial reactions to seeing our maps or learning about the courses we host online. As such, this past weekend was incredibly rewarding to me personally, and I thoroughly enjoyed discussing all aspects of language training with the hundreds, if not thousands, of people who came and spoke to us at our stand.

This was the second year we exhibited at the Language Show, but the first year for which we were actually prepared. Last year, we'd rushed to print two maps prior to the show itself and we didn't have accompanying online programs. We've since completed 5 online courses and have greatly improved the way in which we communicate and explain our methodologies. In particular, we did not have our separate memory course last year; this is key, as the memory course is what makes the maps actually accessible to the average learner.

Our language maps are visually impressive, but also daunting to most people. Unless you are a grammar nut who has studied several languages already, the maps on their own are overwhelming in amount of material and detail. When visitors realized we understood the daunting nature of the maps and that we had unique methodologies to make this material accessible, they became very interested.

I am physically and mentally exhausted, and will need a few days to recover from this weekend. It was a lot of work preparing for the show, bringing everything down to London from Cambridge, and making sure everything ran smoothly. During the actual hours of the show itself, I did not stray from our stall or take any breaks for food - it was that busy! In fact, on the last day, I had to make an effort to go to the neighboring stalls before opening just to say hello. We'd spent the last few days only a few feet away, and scarcely had a chance to greet each other!

As an exhibitor, the atmosphere was really friendly at the show and not at all competitive as you might expect. Other exhibitors came by to see our maps and exchange information, and I managed to say hello briefly to a few exhibitors I'd met at last year's show. We tried to help out our neighbors in hanging some of their materials, and there was definitely some sharing of chocolate and drinks between us in the final hours to help see us through to the end.

Last year, we did not have our map of Arabic. Though not as popular as French or Castilian Spanish, those with an interest in Arabic were extremely enthusiastic. I recall one Arabic teacher spent several minutes looking through the Arabic map displayed in our stall while I was busy speaking with another visitor. When I finished, she turned to me with an amazed look on her face and said, â€œIt has everything!â€ Another man from Egypt insisted on getting pictures with me in front of the map, and came back twice to buy maps and more maps for family and friends.

The enthusiasm and warmth of our visitors this weekend meant a lot to me. I'm looking forward to following up with all the teachers, students, booksellers, and others who left business cards or contact information. As tired as I am, I also found this weekend reinvigorating, and I'm excited to continue our work at Linguisticator with more students, more languages, and more fun.