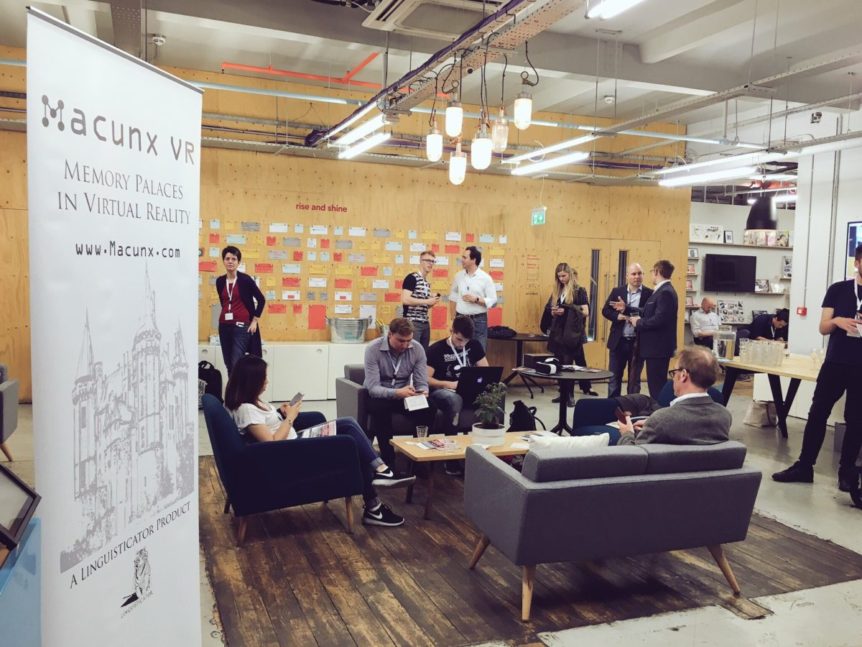 Macunx VR, our platform for building memory palaces in Virtual Reality, has been live on Kickstarter for three weeks now - only one week to go! We hit our Â£3,000 goal in the first few days and have been working really hard to promote Macunx VR everywhere we can - we've now hit Â£5,368, which means we're 179% funded!

It's not too late to pledge if you'd like to help our Kickstarter - you can find us here!

Below is a brief overview of everything that we've been up to over the last few weeks - launch events, TV appearances, press mentions, blog interviewsâ€¦!

We kicked off our campaign with a launch event at Barclays Rise in London - Macunx VR and UKVR Launch: VR for Good. Over 100 people joined us in Whitechapel to discuss how VR has huge potential in non-gaming spaces - see photo below!

TRYING OUT DEMOS AT OUR LAUNCH EVENT!

Aaron's talk focused on how we can use Virtual Reality to unlock the power of our spatial memory - by putting memory palaces into Virtual Reality, we'll be able to train our minds to remember huge amounts of information with incredible ease and amazing retention rates. Aaron was particularly keen to flag up the potential our VR platform has for children with dyslexia. We've been trialling our memory techniques with dyslexic children in Cambridge recently and the results have been truly outstanding - you can read more about the trials in this blog post and Aaron has shared a case study here. It was a real privilege to have Dr Kate Saunders, director of the British Dyslexia, join us at the event - her keynote focused on how visual and spatial systems can help circumvent some of the challenges posed by dyslexia. You can read more about the event in this blog post from Away with Words or here from Virtual Perceptions, a brand new blog from Thomas Ffiske focusing on VR companies in the UK.

AARON TALKING ABOUT MACUNX VR AT THE LAUNCH

Macunx VR has been all over the place in the press too:

And you can see us talking about Macunx VR on Cambridge TV and LabTube - click on the images below to view!

We're now in the last week of our campaign and really pushing towards our Â£10,000 stretch goal. Please help us by pledging if you can and sharing Macunx VR on Kickstarter with friends and family you think might be interested. Macunx VR has so much potential to transform the way we learn so we really want to raise as much as possible in this last week.

As soon as the campaign finishes, we'll be giving all our backers their rewards and we'll continue our development work alongside the fantastic team at Westminster University. At Linguisticator we'll be developing and publishing some memory modules - numbers, presidents of the USA and Countries and Capitals of the world. You can check these out here.

Thank you for all of your support!