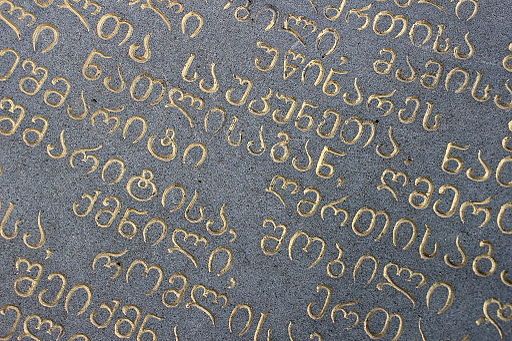 Since 2016, Georgian's three scripts have been inscribed on UNESCO's Representative List of the Intangible Cultural Heritage of Humanity. Mrglovani, Nuskhuri and Mkhedruli have coexisted in Georgia for centuries and, according to UNESCO, reflect the country's diversity and identity at the same time as giving its communities a sense of continuity.

In a video published shortly after UNESCO approved the addition of Mrglovani, Nuskhuri and Mkhedruli to the Representative List of the Intangible Cultural Heritage of Humanity, Metropolitan David Bishop of Alaverdi speaks about the way Georgians view these scripts. He explains how they are deeply embedded for Georgians and represent something that is both intellectual and spiritual.

Before delving into these three scripts, we must first clarify the difference between writing system, alphabet and script. While lots of the literature on Mrglovani, Nuskhuri and Mkhedruli seems to use writing system, alphabet and script interchangeably, there are nuanced differences between these terms and they cannot be taken as synonyms for one another. In The Concise Oxford Dictionary of Linguistics, Peter Huge Matthews defines 'alphabet' as 'A writing system, strictly one in which consonants and vowels are represented equally by separate letters'.

In the Routledge Dictionary of Language and Linguistics, an alphabetic writing system is defined as a 'System of writing based on phonetic and phonological criteria, i.e. a system in which graphic signs represent individual sounds or sound segments'. Like Latin, Cyrillic, Greek, and Armenian, Georgian is an alphabetic writing system. This means that the spoken language is represented by graphemes which roughly correspond to individual phonemes: the modern Georgian alphabet has 33 letters (5 vowels and 28 consonants) and therefore 33 graphemes, each of which is written with a distinct style in Mrglovani, Nuskhuri and Mkhedruli scripts.

In Writing Systems: An Introduction to Their Linguistic Analysis, Florian Coulmas defines 'script' as 'the graphic form of the units of a writing system'. Mrglovani, Nuskhuri and Mkhedruli can therefore be defined as three distinct scripts, all of which represent the same alphabetic writing system.

The history of Georgian's scripts begins with Mrglovani, also known as Asomtavruli. This script is made up of 37 graphemes, defined by its rounded forms and written across two lines.

In the video linked above, Avtandli Arabuli, the director of the Institute of Linguistics in Georgia, speaks of this script very highly, noting that it shows a high degree of phonetic accuracy and is perfect in terms of its geometrical form. The name Asomtavruli means 'capital letters' and, according to Wikipedia's etymological analysis, stems from aso meaning 'letter' and mtavari meaning 'principal/head'. Mrglovani, on the other hand, comes from mrgvali meaning 'round'.

B.G. Hewitt's Georgian grammar provides an in-depth historical analysis of the development of Georgian scripts. In his Georgian: A Structural Reference Grammar, he notes that there are two legends associated with the creation of Georgian script. The first of these is that it was originally created by King Parnavaz in the 4th/3rd centuries B.C as attested in the Georgian Royal Annals. According to the second legend, it was Armenian Bishop Mesrop Mashtots who invented it c. 400 A.D. at the same time as he invented Armenian script and that of the 'lost' Caucasian Albanians.

However, Hewitt highlights that the general consensus on Georgian script, specifically Mrglovani, seems to be that it was created at some point in the 4th century, having been modelled on contemporary Greek, and that the reason for its creation was to facilitate the spread of Christianity. The earliest inscriptions are therefore found in religious spaces, the very earliest dating from c. 430 at the Georgian Church founded by Peter the Iberian near Bethlehem and the oldest in Georgia itself dating back to 494 and found at Bolnisi Sion. The image below is of one of the Mrglovani inscriptions found at Bolnisi Sion .

In the 9th century, the Nuskhuri script came into being. Developed from Mrglovani, it differs in terms of the shape of the letters, the number of graphemes and the way in which the letters are bound together. It has 38 graphemes, is written across four lines and can be seen in its original medieval form below.

Its name Nuskhuri stems from nushka which means 'inventory' or 'schedule', as shown on Wikipedia. The script was used for most manuscripts produced in the 10th and 11th centuries and, when used in conjunction with Mrglvovani capital letters, is known as Khutsuri, stemming from khutsesi which means 'cleric'.

Mkhedruli is the third and most recent addition to Georgia's scripts, dating to around the 12th century. The name for this script, according to an essay on The Georgian Alphabet and Script, means 'for men of the world', and it can be seen below in an excerpt taken from King Bagrat IV of Georgia's 11th century royal charter.

Mkhedruli has, since its very beginnings, been used almost exclusively for secular functions. In The Languages of the World, Kenneth Katzer notes that Mkhedruli is written from left to right, has 33 letters and no upper or lower case. Although this writing system now represents the official state language in Georgia, Mrglovani and Nuskhuri have not entirely disappeared, but instead survive within the Church, specifically the Georgian Autocelaphous Orthodox Church.

UNESCO's addition of these scripts to the Representative List of the Intangible Cultural Heritage of Humanity marks positive steps in terms of the protection and appreciation of these ancient systems. However, equally as importantly, the Georgians themselves granted the scripts cultural heritage status in 2015 and it was this step, according to agenda.ge, that led to Mrglovani, Nuskhuri and Mkhedruli being nominated to UNESCO. With the Georgians showing such pride and enthusiasm for their language's scripts, seeking recognition of them both at home and on the world stage, it seems that these centuries-old scripts will continue to be used for a long time to come.