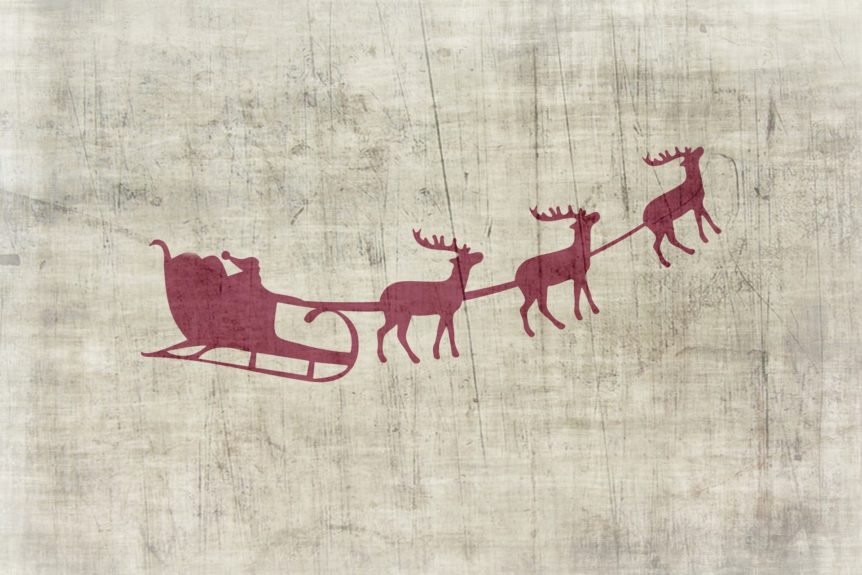 The well-known Christmas poem 'A Visit from St Nicholas', more commonly known as 'The Night Before Christmas', was composed in the early nineteenth century. First published anonymously, authorship was later claimed by Clement Clarke Moore some fourteen years after its original appearance in the Troy, New York Sentinel. The poem tells the story of Christmas Eve night and how, while his wife and children sleep, a father is awoken by clattering sounds outside. As he goes to look out of the window he catches sight of a sleigh in the sky with eight tiny reindeer driven by St Nicholas. After they land on the roof, St Nicholas comes into the house through the chimney with a sack of toys which he uses to fill the family's stockings. Then, without saying a word, he goes back up the chimney and together with his reindeer flies off into the night wishing a happy Christmas and a good night to all. You can find the full poem here.

In the sixth verse of this poem Santa's reindeer are named for the first time as Dasher, Dancer, Prancer, Vixen, Comet, Cupid, Dunder and Blixem. The fact that 'Rudolph the Red-nosed reindeer' is such a popular song means that the number of Santa's reindeer is often increased to nine and Rudolph is given a spot on the iconic sleigh. The names Dunder and Blixen are particularly interesting from a language perspective as they derive from the Dutch words for 'thunder' and 'lightening' and have slowly become Donner and Blitzen as various editors have changed the spelling of these words in their versions of the poem. You can read more about this history here.

In Spanish the names of the nine reindeer, in the conventional order and with the addition of Rudolph at the end, are VondÃ­n, DanzarÃ­n, Chiqui, JuguetÃ³n, Cometa, Cupido, Trueno, RelÃ¡mpago, Rudolfo. DanzarÃ­n, JuguetÃ³n, Cometa, Cupido, Trueno, RelÃ¡mpago and Rudolfo can all be literally translated into English as Dancer, Playful, Cupid, Thunder, Lightning and Rudolph. The only examples of 'vondÃ­n' on the Internet are directly connected to Santa's reindeer so its meaning is unclear while 'chiqui' is an abbreviation of 'chico' which can be used to mean 'small'.

In Portuguese we have Corredora, DanÃ§arina, Empinador, Raposa, Cometa, Cupida, TrovÃ£o, RelÃ¡mpago and Rodolfo. What is interesting here is that some of the reindeer names are given in the feminine with the -a ending, something we don't find in the French or the Spanish. A 'corredora' is a female relay runner and a 'danÃ§arina' a female ballet dancer. 'Empinador' seems to come from the verb 'empinar' which means 'to prance'. 'Raposo' is a male fox, so 'raposa' is presumably the female equivalent, 'vixen'.

In Germany Santa's reindeer have the same names as we find in English while in Italy they are called Saetta, Ballerino, Schianto, Guizzo, Cometa, Cupido, Tuono, Lampo and Rodolfo which we can translate as Lightening Flash, Dancer, Crash, Dart, Comet, Cupid, Thunder, Lightning and Rudolph.

If you're interested in having a look at the names given to Santa's reindeer in other languages, this table on Wikipedia is a good place to start.