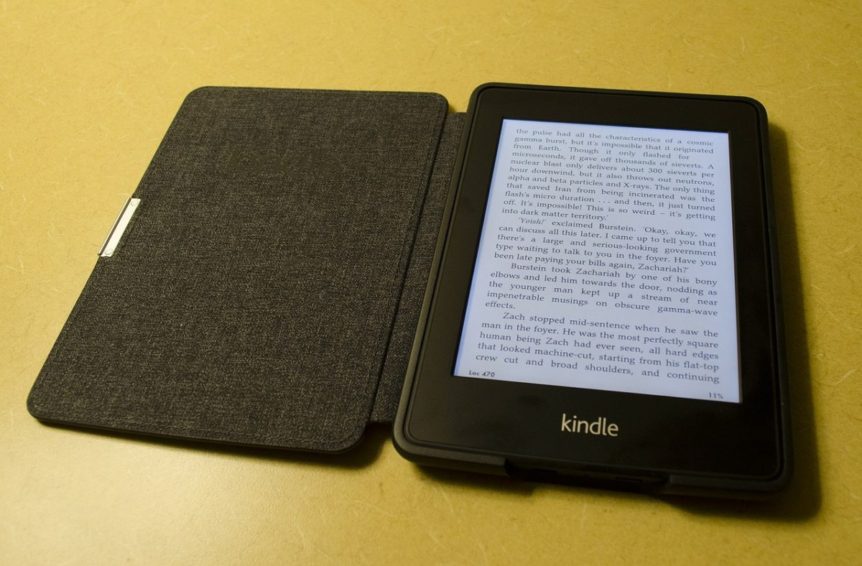 As a medievalist by training, you might guess that I have a fondness for books and manuscripts. I love the printed word, and the tactile experience of reading a book. The smell of a library is rich and calming, and I'm always attracted to bookstores and images of stacks filled with volumes. Our fabric language maps expand on the tactile nature of consuming language. Despite all this, I'm actually a big fan of Kindle and e-books as a supplement to, rather than a replacement of, the original book.

Having moved across the Atlantic several times, I have a great appreciation for being able to store thousands of titles in the space of just one. I once bought a large picture dictionary in Iceland (the StÃ³ra MyndorÃ°abÃ³kin), which weighed a ton, and proceeded to carry it with me in the bottom of my backpack for the next several weeks as I traveled by boat to Denmark and then on to Germanyâ€¦ It was a gem of a book, but a pain to carry, and that was just one book!

In addition to the portability and flexibility of e-books and e-book readers, reading e-books in foreign languages on Kindle is brilliant because of built-in dictionaries. While I often encourage students to continue reading without looking up words â€” and thereby develop an organic vocabulary through context and repetition â€” being able to look up words instantly is great for doing close reading and parsing. Also, if you've seen a word several times and still can't figure out what it means, it's great to be able to touch it with your finger and have a definition come up. Dictionaries also contain IPA transcriptions of words, so you can see the phonetic pronunciation of a word in a text â€” very handy when you're reading aloud.

The one problem with reading foreign language books on Kindle is not unlike the problems one encounters when trying to get lots of books and movies in foreign languages: it can be hard to find the titles you want in your own region. Since Kindle stores are regionally based on Amazon's zones, you have to find books in the same zone as your Kindle is registered. It's pretty easy, though, and also pretty inexpensive, to get Kindle titles for older books and classics.

If you can find foreign language audiobooks and also get the same title on Kindle, it's very easy to listen to the audiobook and follow along in the text at the same time. This is particularly useful for train commuters, as you can read the book on the Kindle app on a smartphone or tablet while listening to the text on headphones.