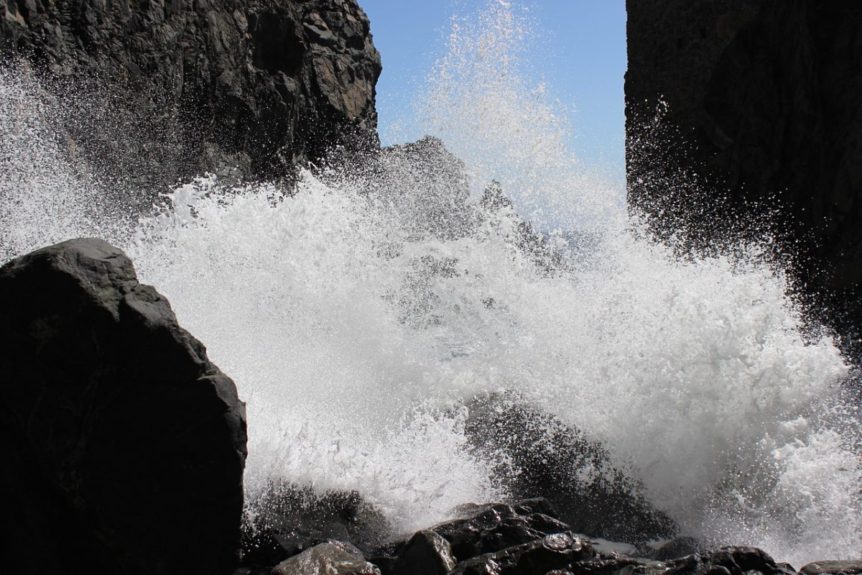 La Gomera in the Canary Islands is one of the few places in the entire world with a whistled language. The island's valleys and deep ravines play host to a whistled register of Spanish, Silbo Gomero, that has just two vowels and four consonants, and is fascinating to listen to.

Silbo Gomero has attracted lots of attention over the years, from scholars like Marcial Morera, quoted in an article on the BBC, who see it as a means for understanding how language is formed, to filmmakers like Angello Faccini whose film The Whistling Shepherds of the Canary Islands, linked below, is a beautiful snapshot of the language and one of its speakers.

UNESCO have also recognised the importance of this language, designating it a Masterpiece of the Oral and Intangible Heritage of Humanity in 2009. In their short summary of the language, they underline its uniqueness: it is the only whistled language in the world that is fully developed and practised by a large community, in this case by more than 22,000 islanders. They also highlight several other key facts about the language, namely that it has been taught in schools on the island since 1999 and is understood by almost everyone who lives there.

The language has inspired a great deal of rich and interesting scholarship on the concept of whistled speech, defined by Meyer and Gautheron in their article for the Encyclopedia of Language and Linguistics as "a system of communication based on whistles modulated according to features in common with the spoken equivalent". In her article on the phonetic and phonological aspects of whistled languages, Annie Rialland notes that Silbo Gomero was the first of the world's whistled languages to be studied scientifically and that its close relationship to Spanish was noted by Lajard in 1891: Lajard, quoted in Rialland's article, found that Silbo Gomero is "nothing special from a linguistic point of view, because it is Spanish."

That its connection to Spanish is "nothing special" in terms of linguistics is certainly a contentious point and does not seem to hold true if we look at the sheer amount of research done on Silbo Gomero. Indeed, Rialland's article goes on to analyse precisely this, looking at the notion of transposition between Spanish and Silbo Gomero, and comparing spectograms of spoken speech to ones of whistled speech.

In the YouTube video linked below, we see how a silbera makes use of the six whistled sounds that make up Silbo Gomero to talk with her friend across a crowded market place and, thanks to the video's Spanish subtitles, we are able to get a feel for how the transposition from Spanish words to Silbo Gomero whistles works as well as an understanding of just how intrinsically linked the two languages are.

Silbo Gomero was not always so closely linked to Spanish. It is widely recognised in scholarship on the language that its whistled form is an inheritance from the Guanches, the Canary Islands' native inhabitants who were originally from North Africa and used a whistled form of their own Berber language to communicate across La Gomera's landscape. As the blogger kuschk explains on the Basement Geographer, it was only when the islands began to be colonised by the Spanish in the 15th century that Silbo Gomero started to change: with Spanish becoming ever increasingly the language of the population, Silbo Gomero was adapted to it and can now, as seen above, be closely mapped to spoken Spanish.

In her piece on the history of Silbo Gomero, Susan Henn speaks about the language's more recent history, noting how it was used as a means of covert communication during the Spanish Civil War with talented speakers employed by both sides in order to transmit messages. She also explains that Silbo Gomero was used as a means of resistance during the Civil War as well as under Franco's dictatorship. This is expanded in the BBC's article on Silbo Gomero where they describe how Silbo Gomero speakers would communicate with one another in whistles in order to alert each other to the arrival of the Guardia Civil: the Guardia Civil often called on the islanders to help put out fires in the mountains but refused to pay them for their work and so they would try to avoid them in this way.

The twentieth century, however, saw the language lose many of its speakers: the blogger kuschk, writing on Basement Geographer, attributes this loss to three separate causes, the first being the influx of telephones, the second the arrival of mass media in Spanish and the third the growing number of tourists visiting the island. The same BBC article on Silbo Gomero highlights another cause, finding that the 1950s saw a large decline in the number of Silbo Gomero speakers because a significant number of them emigrated, mainly to Venezuela and Tenerife, and were no longer on the island to support the language and continue using it.

Since then steps to revitalize the language have been taken and it is thriving once more, particularly among young people: it has been compulsory in schools for some years now and as such there is a growing population of new speakers. It has become an important part of La Gomera's tourist industry and this unfortunately brings with it new challenges for the language: Hernandez Morrero, an archaeologist on the island quoted on the BBC, fears it might become a clichÃ© and likens it to how tourists arrive on Hawaii and are given a string of flowers to wear around their neck.

However, all things considered, the future appears bright for Silbo Gomero and interviews with Silbo Gomero speakers as well as initiatives for teaching it on the island itself and enthusiasm for the language support UNESCO's definition of the language as an "intangible cultural heritage cherished by the inhabitants of La Gomera and the Canary Islands as a whole."