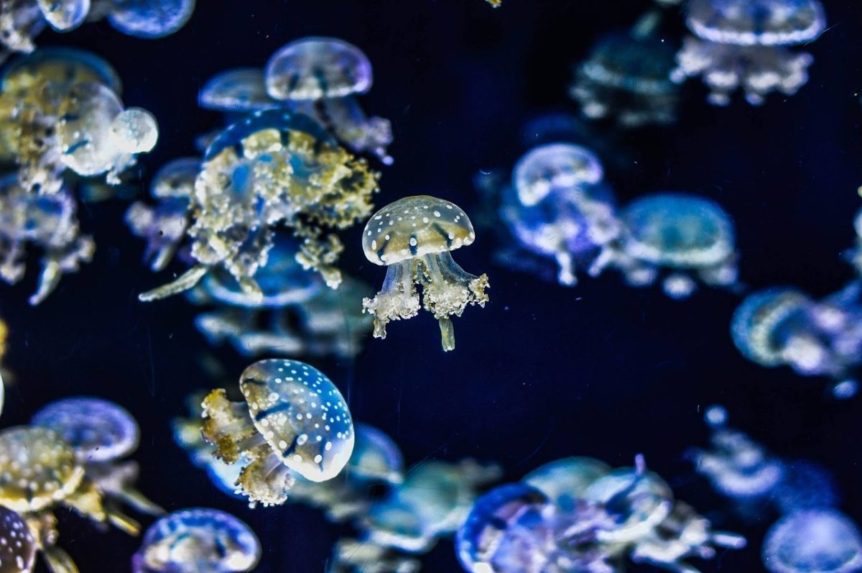 A murder of crows. A gaggle of geese. A smack of jellyfish.

I've always been fascinated by the sheer number of different words we have in English to refer to different groups of animals. My favourite to date has to be a 'smack of jellyfish' - it's almost onomatopoeic, exactly what you'd expect a pile of jellyfish to sound like if they ran into something. For me, the fact that we have so many of these collective terms is possibly one of the quirkiest things about the English language and I love it when I come across one I haven't heard before.

I've never actually known where these terms come from so this week, I thought I'd find out where these turns of phrase come from.

A quick search on Wikipedia led me to a page titled 'List of English terms by venery, by animal'. I hadn't heard of the word 'venery' before so my next step was to work out what that meant. Another quick search and I'm on a page telling me that venery is both a historical term for hunting game and also a word for the practice or pursuit of sexual pleasureâ€¦

The meaning I'm looking for is fortunately the first of these. From venerie in Middle English and Middle French, and from the Latin vÄ“nor, venery is an old word used for hunting.

Terms of venery date back to the Late Middle Ages, a time when hunters began developing their own kind of language. David Dalby notes in Lexicon of the Mediaeval German Hunt that the â€œconscious cultivation of 'correct' hunting language had its origin in Medieval Franceâ€ (1965: xi). This tradition was then introduced into England by the Normans and arrived in Germany in the post-medieval period. In terms of tracking the progression of this trend, it seems to have come into being at the beginning of the 14th century, grown considerably over the course of the 14th century and taken on a life of its own by the 15th century when it is an entirely exaggerated version of what it had been just one century before.

For Dalby, this kind of language was marked by â€œthe extensive proliferation of terms, whereby different names were given to the same feature in different animalsâ€(1965: xii). Throughout his discussion of hunting language, he continually points towards how this language is artificial, cultivated and self-conscious (1965: xi-xii). What explains the widespread adoption of this language then? Dalby highlights how the hunt in France and England became an important part of courtly life (1965: xlii). With hunting an integral part of the court, hunting language therefore becomes intrinsically linked to courtly identity - to be a good knight is to be a good hunter and to be well versed in this hunting language. Presumably the more detailed your knowledge of hunting language, the more highly esteemed your hunting skills and the better your standing within the court.

Where can we look to for examples of this tradition then? Wikipedia led me in a few different directions and the texts suggested clearly mark how this trend evolved between the beginning of the 14th century and the 15th century.

1 - William Twiti, huntsman for King Edward II, composed L'Art de vÃ©nerie (The art of hunting) in Anglo-Norman French. Composed in the early 14th century, this text sees a huntsman answer questions put to him by his apprentice. In the course of this dialogue, the text notes three different terms for animal droppings (charming!), three terms for the herds of various game, four separate terms for the wild-boar and six for the stag (Dalby 1965: xli).

2 - In the Master of the Game, from the early 15th century, we can see clearly how the trend towards an elaborate hunting language is growing - there are now seven terms for different game droppings! (Dalby 1965: xli)

4 - Egerton MS 1995 (c. 1452) and the Boke of St Albans list almost 70 different terms for various herds and flocks of animals and birds. In the Boke of St Albans, there are 21 different terms for different game (Dalby 1965: xli). This text was composed in 1486 and contains three essays, one on hawking, another on hunting and the final on heraldry. It was said to be the gentleman's guide, teaching you how to excel at being a gentleman. Interestingly, the author is believed to be Dame Juliana Berners, one of the earliest women writers in English (Appleton).

6 - The Gentleman's Academic by Gervase Markham, written in 1595, edited and commented on the Book of Saint Albans and led to many of these terms becoming a part of the Standard English lexicon.

Here are just a few of my favourites:

And if you'd like to check out more, then this index is particularly fun to scroll through: https://xaeyruudh.wordpress.com/2012/01/28/venery-animals/

David B. Appleton. The Boke of St. Albans: A modern rendition of a medieval treatise on heraldry as reprinted in Inquiries Into the Origin and Science of Heraldry in England by James Dallaway 1793, Modern English Rendition. < http://www.appletonstudios.com/StAlbansSample.pdf>

Yale Center for British Art. The craft of venery, circa 1450. < http://collections.britishart.yale.edu/vufind/Record/2038967>