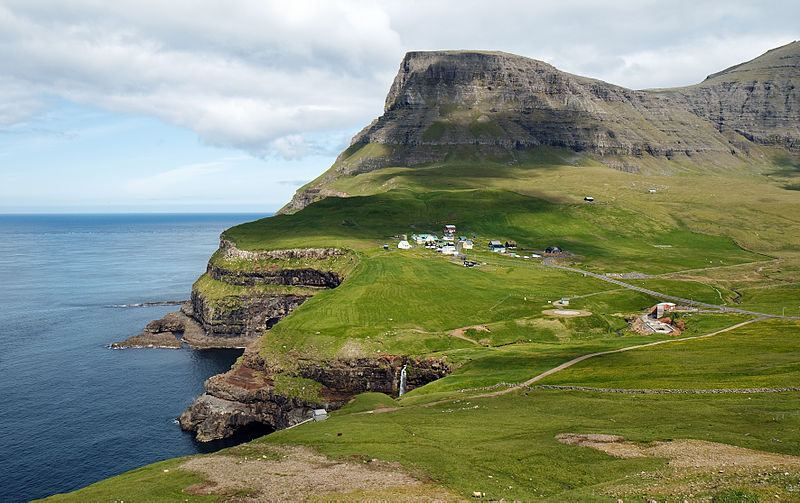 Many of us will have heard of the Faroe Islands, an archipelago of some 18 islands that lies between the Norwegian Sea and the North Atlantic, about 200 miles northwest of Scotland. If we havenâ€™t heard of the self-governing country, then itâ€™s likely we will have seen its rugged landscape on our screens at some point because since 1907 its islands have made for particularly popular backdrops amongst filmmakers. In 2016 for example, Wim Wenders and his crew relocated to the Faroe Islands, specifically Saksun and GÃ¡sadalur, to shoot some footage for the background of Submergence, a thriller to be released later this year starring James McAvoy and Alicia Vikander. However, itâ€™s quite likely that many of us wonâ€™t have heard of Faroese, one of the archipelagoâ€™s two official languages. This blog post will look closely at the status of Faroese in terms of language policy, at its history and also at the measures in place on the Faroe Islands to modernise and make this language relevant to new generations of speakers. If youâ€™d like to hear Faroese being spoken and learn how to say a few words before delving into the language in more depth, take a look at the video linked here.

Faroese is a North Germanic language with three grammatical genders and four cases that descends from Old West Norse. It is one of five languages that descend from this medieval tongue, the others include Norwegian, Icelandic and the extinct Norn and Greenlandic Norse. Today, together with Danish it is one of the official languages of the Faroe Islands and it boasts some 48,000 speakers. This number of speakers is worthy of note given that the 2016 Faroe Islands census, also listed on Ethnologue, revealed there were 49,600 people living on the archipelago. The proximity of these two figures highlights Faroese's position as primary language across the islands. However, the language has not always enjoyed official status or acceptance, as we shall see below.

In terms of its history, Omniglot notes that the Faroe Islands were colonised in the 9th century by settlers whose language was Old Norse. Between 800 and 1050 this divided into Eastern Norse, later to become Swedish and Danish, and Western Norse, later to become Norwegian, Faroese and Icelandic. The Encyclopedia Brittanica state that Faroese conserves more Old Norse characteristics than any other language except modern Icelandic, but this is not to say that Faroese and modern Icelandic are mutually intelligible. In fact, while they are closely related and share many orthographic similarities, it is widely recognised that the two languages are mutually unintelligible when spoken.

101Languages note that the 1536 Reformation saw Faroese banned by the Danish: it could no longer be used in churches, schools or official documents. However, the Faroese people continued to use their language in everyday life, as they told folktales and sang ballads, meaning that a strong oral tradition survived and Faroese never died out on the Faroe Islands. By the time Venceslaus Ulricus Hammershaimb, a Faroese Lutheran minister, decided to establish a standard written form for Faroese based on Icelandic in 1846, Faroese had not been written down for almost 300 years. According to 101Languages, a rival orthographical system, closer to the spoken language, that was created at the same time by Jakob Jakobsen did not have much success and it was Hammershaimb's more complex system that prevailed. The establishment of an orthography for the language seems to have heralded the start of a flourishing of Faroese on the Faroe Islands, both in terms of literary production and in terms of the language's official status.

During the late 19th century, modern Faroese literature began to appear (see more here) and in 1890 the first Faroese newspaper appeared. However, it was not until 1938 that Faroese gained official recognition and until this time schools and churches that wanted to use Faroese instead of Danish had to apply for special permission. 1948 was the year of the Faroe Islands Home Rule Arrangement. This act, together with the Danish Constitution and The Takeover Act, constitutes the Faroe Islandsâ€™ constitutional position in the Unity of the Realm and also lays out language policy. The Home Rule Act recognises the Faroese language as the principal language in the Faroe Islands, but says that Danish must also be taught and that it may be used in official matters just like Faroese.

Today Faroese is thriving on the islands and is entirely relevant to new generations of speakers. Indeed, the Faroe Islands' own website states that the 'Faroese people are conscious of the need to preserve their language by keeping it resilient in the face of global influences'. Sprotin, a Faroese language tool set up by Jonhard Mikkelsen, is a clear example of how the Faroese have made their language accessible and modern. Sprotin is an online Faroese dictionary platform that in 2010 could be found in every public school on the Faroe Islands. When the Ministry of Culture and municipalities withdrew funding for subscriptions to the dictionary, students boycotted classes for their right to use Sprotin and 'sprota' has now become a verb, meaning something akin to 'googling' - you can read more about this in an interview with its founder that can be found here.

It is also interesting to read on the Faroe Islands' website that research and development of the Faroese language is listed as 'a highly political priority of the government'. Faroese is embedded in institutional practices on the Faroe Islands, both in government and education. The Language Committee of the Faroe Islands was founded in 1985, almost two decades after the establishment of the University of the Faroe Islands, one of whose aims is to teach Faroese language and literature at university level. Its Department for Faroese Language and Literature offers both a BA and an MA programme that teach Faroese studies in great depth and also offer an introduction to other Nordic literatures and languages. Aaron Ralby, CEO and founder of Linguisticator, spent some time in the Faroe Islands in 2010 and noted that Faroese literature is not the only kind of work available to read on the archipelago. On visits to bookshops Aaron noticed a strong commitment to the translation of world literature with translations of everything from children's books and fairy tales to Dan Brown available and accessible in Faroese.

The Faroese language is also very much open and available to non-Faroese speakers. A partnership between the University of the Faroe Islands and the University of Iceland saw the release of a free online language course for foreigners with no prior knowledge of Faroese which can be found here. There is also a chance for foreigners with knowledge of Germanic and Scandinavian languages to apply to the International Sumer Institute in Faroese Language and Culture held at the university in TorshÃ¡vn. More information about this course and ways to apply can be found here.

The development of Faroese from Old Norse to a modern language with its own technological resources that are both inward and outward looking is fascinating. We hope that if you are a university student with prior knowledge of any Germanic or Scandinavian languages, you are inspired to apply to the summer school held in the Faroe Islands, and if you are looking to learn some Faroese in your own time at home, then please take a look at the links above that take you to courses part-developed by native Faroese speakers.