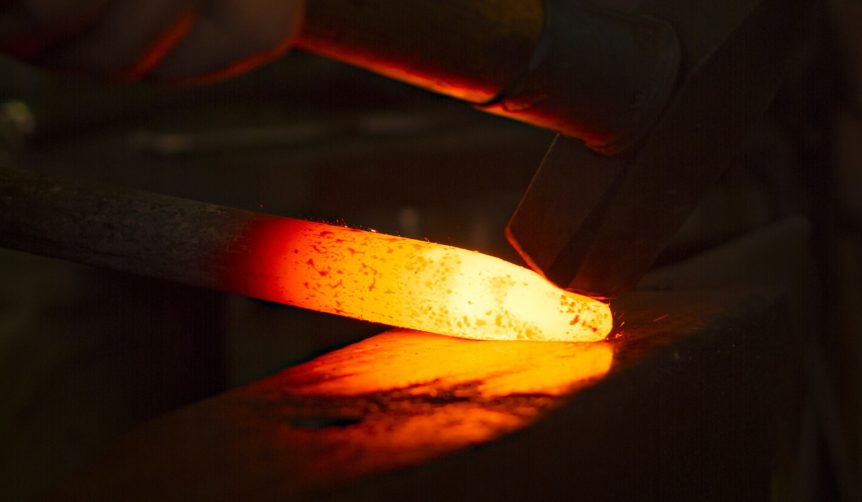 According to legend, when SigurÃ°r Sigmundsson came of age, he asked his foster father, the dwarf smith Regin, to forge for him a sword. Regin did so, and brought to SigurÃ°r a magnificent blade. SigurÃ°r took the blade and tested it by swinging it against the smithâ€™s anvil. The sword shattered.

â€œMake me another, stronger sword,â€ said SigurÃ°ur. Regin did so.

Again, SigurÃ°ur tested the sword against the anvil, and the sword broke in two. â€œWhat are you playing at?â€ asked SigurÃ°r.

SigurÃ°r then went to his mother and asked for the shards of his father Sigmundrâ€™s sword, which OÃ°in himself had broken on the battlefield when it came time for Sigmundr to meet his ancestors. From the broken pieces, Regin made a new sword, which was called Gramr. This time, when SigurÃ°r tested the blade, the anvil split in twoâ€¦.

Legendary heroes require legendary weapons. The ordinary metal and materials of ordinary weapons are not strong enough to withstand the heroâ€™s strength. Achillesâ€™s armor was forged by Hephaestos, the Monkey King had his magical iron staff, and we see this motif as a central narrative element in modern stories and renditions, from Thorâ€™s hammer MjÇ«lnir, to Captain Americaâ€™s shield of vibranium, to Wolverineâ€™s adamantine claws.

As a medievalist, I have long been inspired by legends. Tales of great heroism, both real and imaginary, have always motivated me to push myself harder, whether that be physically, mentally, or spiritually. It is not my destiny to possess the physical prowess or kingly greatness of SigurÃ°ur or Beowulf; I am a scholar. But as a scholar, I can still seek a different kind of strength, a different kind of greatness.

It took me several years to rekindle the forgotten arts of memory for learning and composing complex subjects. Once the spaces took shape in my mind, crystallizing into their perfect structures, I ran into another, even more challenging problem. How could I communicate these memory palaces to the rest of the world? I was a writer, and for this task, words failed me. There had to be a way not just to describe my memory palaces but to show them. I needed to create a way for other people to walk in my mind.

Macunx VR is the solution to that problem. In it, we can build an infinite number of infinite spaces, capable of holding and demonstrating the complexities of any real-world subject. The globe may be mapped, but we can still explore our imagination; and now we can do so in virtual reality.

Iâ€™ve been working non-stop on building the resources and materials at Linguisticator for many years, and have been working on memory for longer still. Yet, when I speak with friends or meet new people, they often remark on how animated I become when talking about memory palaces in virtual reality. Itâ€™s true. I cannot conceal my excitement (nor do I try). The experience of learning a new subject with a memory palace is exhilarating and genuinely life-changing.

My legendary weapon is not made of iron or fire, but rather of cloud. It is called Macunx VR, forged by the twin smiths Aleksandar and Milos Kojic in the hills of Serbia. Macunx VR is my Gramr, MjÇ«lnir, or NÃ¦gling. And instead of splitting skulls, it will open minds.