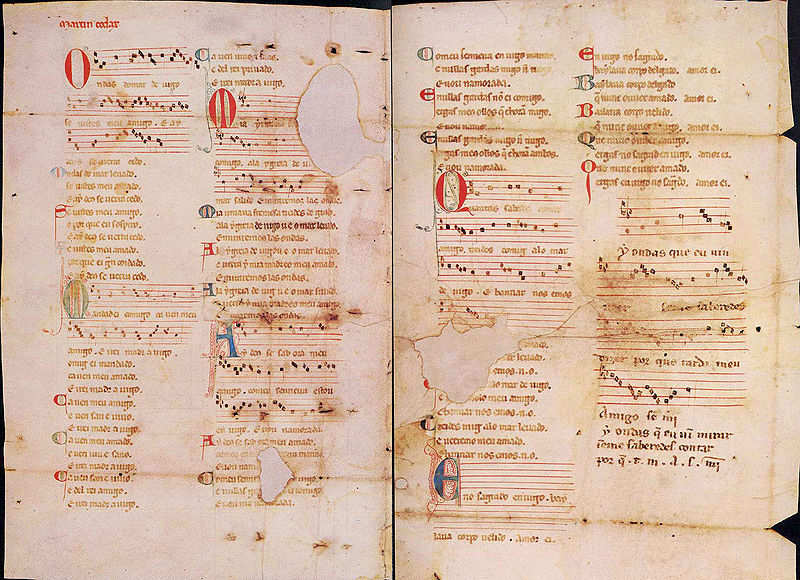 On Monday 25th September the PergamiÃ±o Vindel will start its journey from the Morgan Library & Museum in New York to the Museo do Mar in Vigo where it will be the main feature of an exhibition organised by the Xunta de Galicia and the Universidade of Vigo.

The thirteenth-century manuscript conserves seven female-voiced love songs written in Galician-Portuguese by Martin Codax, a Galician troubadour. These songs also survive in the Cancioneiro da Biblioteca Nacional and the Cancioneiro da Ajuda, but it is only in the PergamiÃ±o Vindel that they appear with musical notation. Indeed, these are the only female-voiced songs within the entire corpus of medieval Galician-Portuguese poetry to have survived with their original musical notation - if you'd like to listen to these songs played and sung by contemporary artists using the original words and notation, please click here and look at the cantigas sung by Martin Codax.

Found quite by chance according to the description of the manuscript on the Morgan Library & Museum's website, the PergamiÃ±o Vindel was discovered by Pere Vindel in 1914 in the binding of a manuscript copy of Cicero's De officiis. A similar discovery took place in 1990 by Harvey Lee Sharrer who found seven male-voiced love songs composed by the King of Portugal Don DenÃ­s in the binding of a 16th century book in the Torre do Tombo archive in Lisbon - if you have access to JSTOR, you can read his passionate announcement of the discovery here.

The PergamiÃ±o Vindel will be available to see at the Museo do Mar in Vigo until March 2018 and multiple concerts, talks and events will be organised to coincide with this exhibition. If you are in Galicia and near Vigo or if you are interested in medieval lyric, then it is well worth looking into the Museo do Mar's opening hours and its list of activities related to the PergamiÃ±o Vindel which you can find here.