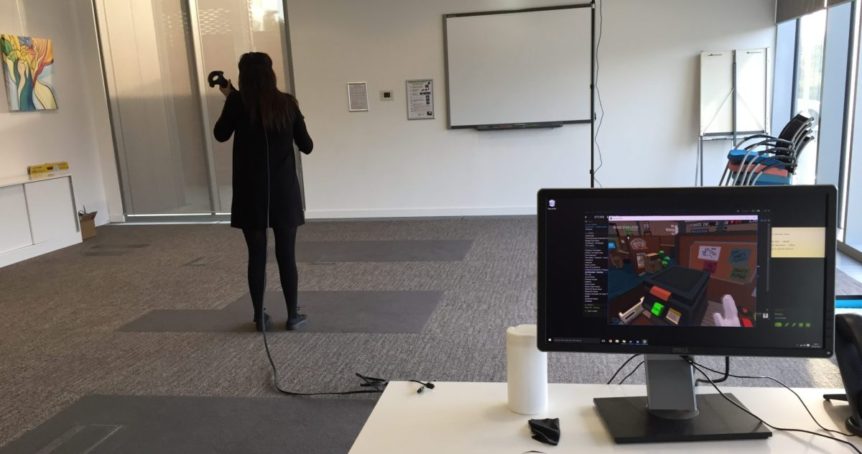 Last night, Harriet and I had the pleasure and privilege of trying the new HTC Vive for the first time. Wow. It was incredible! I could hardly fall asleep last night I was so excited about how well the technology works and how easy it will be to build memory palaces in VR once we get our new Macunx software built.

The HTC Vive has been reported to outperform the much-hyped Oculus Rift headset that has been in the press for the last few years. Oculus, bought by Facebook, has been struggling lately with a combination of delayed pre-orders and a new controversy in which the company decided to ship headsets to Best Buy for general release prior to filling pre-orders. Not the best strategy for customer loyalty. In terms of usage, however, the Oculus - which I have not tried - is apparently brilliant in terms of optics and motion tracking, but uses an old style game controller. Manipulating the virtual environment is therefore clunky and cumbersome. The Vive on the other hand uses two hand-held wands with a series of simple buttons. The controls blew me away.

Not only were the controls super intuitive to use, but the system's motion tracking is so good and so instantaneous that they feel immediately like an extension of your own body. When the demonstrator handed me the controls, I had the headset on already. I could not see Andy (the event organizer) in front of me, but I saw the outline of the two controller emerge out of thin air. I tentatively reached out to grab them, expecting to experience some spatial disconnect between my perception of where the controllers were and where they actually were. When I grabbed the outlines, I was instantly amazed at how the expected disconnect did not arrive - the controllers were in real life exactly where I saw them in the virtual world.

I was taken through a series of VR demos, first just observing an underwater scene on a shipwreck. Fish swam all around. Looking down, I saw the shadow of a ray, so I looked up - and there was a manta ray swimming over my head. Eventually, a massive blue whale swam by for a look. Looking down into the steep drop by the side of the ship, I actually felt my balance affected for a moment.

The next demo was an office simulation where you could actually manipulate objects. This is what got me most excited. Picking up and moving objects was so intuitive and naturally, it was uncanny. I made a cup of coffee and spilled some as I lifted the coffee mug out of the coffee machine. I did a double-take when I had to remind myself I hadn't actually spilled any coffee. For our Macunx VR memory palace project, this fluidity and ease in manipulating objects in VR is critical. There was no lag, and the two-handed control system made it possible to adjust to the virtual world remarkably quickly. You could even lift the lid on a box with one hand and pull out a donut with the other!

Drawbacks of the HTC Vive?

For our purposes in building memory palaces in virtual spaces, the technology ticked all of the boxes. It's not just a concept that could be really cool many years in the future - it is here and ready now.

In terms of the overall experience, there are a few things that will need improvement to increase the sense of presence. First, the resolution is not that great. You can tell you are looking at a screen. While the images are crisp, it's a bit like watching TV in the 90's. I've no doubt this will improve quickly, but when you've become used to retina screens and the like, you definitely notice the resolution.

Second is field of view. There's no peripheral vision, which makes it really difficult in games where things are flying at you from behind or from the side. You have to constantly turn your head. Couple this with the limitations in sound positioning, and it's hard to develop a realistic awareness of objects moving around you in VR. In other words, in real life we can hear and feel when someone or something is approaching from behind or from the side - and then they enter our peripheral vision. In VR, you kind of only hear if something is to the right or left and then see it when it is actually in front of you. It reminds me a bit of wearing a helmet playing lacrosse, but you have much less total perception in VR than you do in a helmet.

The two final issues for me were the cord connecting to the computer and the earbuds that kept falling out every time I moved. The headset is tethered, which really wasn't a big deal, but I was aware of the heavy cord down my back and around my feet. Neither I nor anyone I saw try the HTC Vive last night tripped over the cord - it's surprisingly easy to avoid - but when turning around a couple of times, I did feel myself start to get wrapped up in it and had to turn back in the other direction.

The earbuds can be swapped out, which is great, because the ones included kept falling out. When I moved, they fell out, so I stayed pretty still and didn't want to turn my head, which affected the experience because there is no peripheral vision. I'm not actually sure if the earbuds used last night were the ones that came with the Vive, but I really wanted to swap them out for my Bose noise cancelling headphones.

All in all, the HTC Vive is remarkable. What quibbles I had with it are minor and will no doubt improve with time. They certainly didn't affect the functionality of the product, which is key. It was a thoroughly immersive and incredible experience. Many thanks to Cambridge Virtual Reality Meetup for hosting the event!