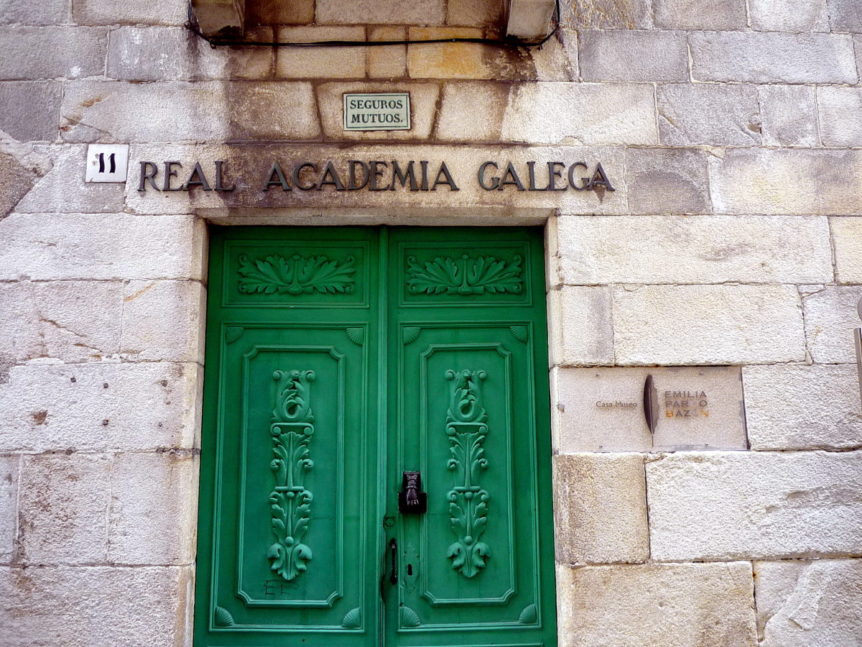 I'm in Santiago de Compostela on a Galician language course at the moment - in one of my previous blogs I spoke about just how much I love Galician so it's really great for me to back here in Galicia, improving my language skills and learning more about Galician culture.

The courses run every year and are organised by the Real Academia Galega, the Instituto da Lingua Galega, the SecretarÃ­a Xeral de PolÃ­tica LingÃ¼Ã­stica and the DeputaciÃ³n da CoruÃ±a. They've been going for 29 years and have seen hundreds of students come from all over the world to learn Galician. I came three years ago and am back again this year. One of the key messages the organisers always want us to take away with us is that we are ambassadors for Galician in our own countries - this is a role I am more than happy to take on and one that I hope I'll be able to fulfil for a long time to come!!

One of the most exciting things about these courses is the range of people you get to meet - undergraduate students, PhD students, university professors, translators, social workersâ€¦ It's a great mix of people. Not only do we come from different professional backgrounds, but we also come from all different corners of the globe. This year 16 different countries are represented here in Santiago de Compostela - Argentina, Brazil, Chile, Finland, Germany, Hungary, Ireland, Italy, Japan, Poland, Portugal, Russia, Singapore, Switzerland, U.K., U.S. No wonder the name of the courses is Galego sen fronteiras!

Last Friday we went on a trip to the Real Academia Galega and I wanted to share the history of the Academy and its purpose here on Linguisticator's blog. XesÃºs Alonso Montero, the Academy's current president, spoke to us after a tour of the building about the journey that took him to presidency of the Academy and also about the Galician poet Lorenzo Varela who was born 100 years ago. Listening to XesÃºs Alonso Montero speak is inspiring - his passion for the Galician language is undeniable and his ability to have 60 students from all kinds of countries hanging off his every word for a whole hour is formidable.

The first room we saw on entering 11 RÃºa das Tabernas, the headquarters for the Academy, was an ornate space with a general seating area and then a raised level with 30 chairs. Each member of the Academy has a chair here and it is these members that vote when the Academy discusses the formalities of the Galician language.

The Real Academia Galega lists seven aims on its website, which I have outlined and paraphrased below:

The Academy was officially inaugurated on 30th September 1906 and attendees included people from two of the most important groups working on the Galician language at the time, one group for whom values from the Rexurdimento and Rexionalismo were particularly important and another formed by Galician emigrants who had founded the AsociaciÃ³n Iniciadora e Protectora da Academia Galega in 1905 in Cuba. The aim of this association had been to unite the Galician language and publish a grammar and a dictionary, and the RAG say that it was the creation of this association that led to the formation of the Real Academia Galega.

The first president of the Academy was Manuel MurguÃ­a, a great historian and also RosalÃ­a de Castro's husband. The RAG flourished under his presidency (1906-1923), holding cultural acts and publishing the very first BoletÃ­n da Real Academia Galega, an academic publication.

MurguÃ­a died in 1923, leaving in place a well-structured, strong Real Academia Galega, However, MartÃ­nez Salzaar, whom many thought to be his natural successor, died soon after MurguÃ­a, leaving the Academy in a state of limbo. This instability was heightened by the fact that Cuba stopped sending resources over to Galicia and Primo de Rivera's dictatorship began. However, none of this spelt the end for the RAG since many important cultural figures joined the Academy during this time and the AsociaciÃ³n Iniciadora e Protectora da Academia Galega sent financial aid, seeming to point towards a new beginning for the Academia.

The start of the Civil War in 1936 would put a halt to this growth. Under Franco, the Academy was allowed to continue, but only in a symbolic way and its formal work was only returned to in 1943. A new impetus seemed to be present in the Real Academia Galega at this time with multiple intellectuals from Grupo Galaxia joining the Academy. In 1963, the first DÃ­a das Letras Galegas, a day for celebrating Galician literature, was held to coincide with the centenary of the publication of RosalÃ­a de Castro's Cantares Gallegos - a wonderful book of poems that capture the essence of Galicia! This year's will be dedicated to Carlos Casares, one of the most important literary figures from the 20th century.

Domingo GarcÃ­a-Sabell was president of the Academy from 1977 to 1997 and his presidency saw the Acordo OrtogrÃ¡fico de 1982 go through, the inclusion of the RAG in the Lei de NormalizaciÃ³n LingÃ¼Ã­stica and the creation of the Seminario de LexicografÃ­a and the Seminario de SociolingÃ¼Ã­stica, a body that produced a sociolinguistic map of Galicia highlighting where Galician was spoken and by whom. Francisco FernÃ¡ndez del Riego was president from 1997 to 2001 and his presidency saw the Academy open up to scientists and members from all different kinds of cultural backgrounds. The subsequent president, XosÃ© RamÃ³n Barreiro, continued along similar lines to his predecessor and saw the Acordo OrtogrÃ¡fico de 2003 passed.

Today the Real Academia Galega focuses on three main areas: language, literature and history. One of the most interesting sections is Termigal, part of the SecciÃ³n de Lingua - Termigal is where specific vocabularies are developed, e.g. tech vocab!

It was a great honour and privilege to be welcomed at the Real Academia Galega last week by its president and I look forward to finding ways to support their work in the future!

The beautiful cover photo is from Certo Xornal and can be found on Flickr by clicking here.