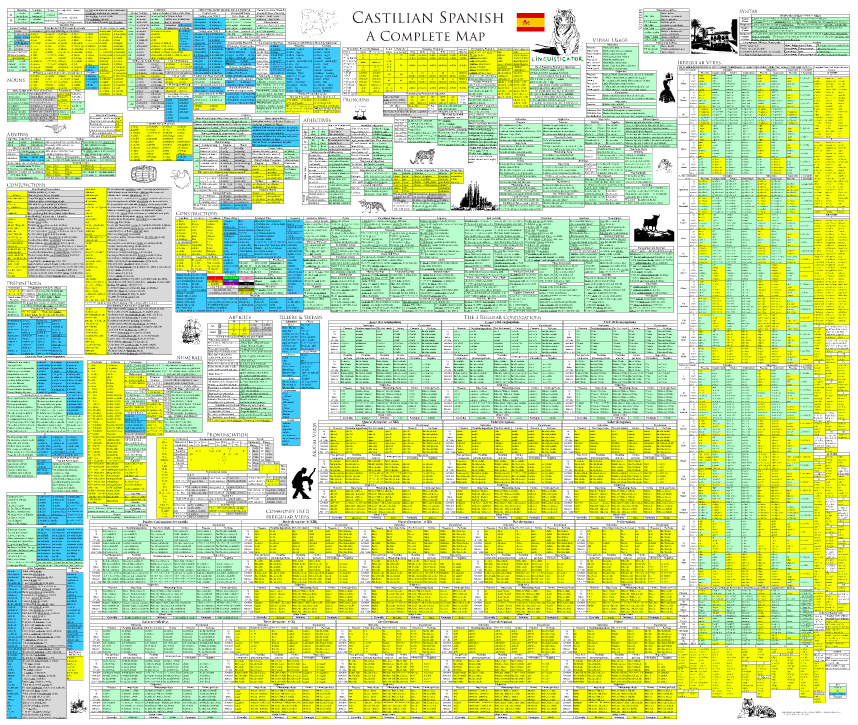 The other day, I posted a blog about why both Latin American and Castilian varieties of Spanish are both real and proper. Even if you have studied a good bit of Spanish, you may still be wondering: What exactly are the differences between the varieties?

Breaking up varieties of a language is challenging at best. Some languages can present differences that can be localized to a single village or very small geographic area. For a language as widely spoken as Spanish, there are many different accents and idiomatic expressions. Nonetheless, there are major divisions we can make on the basis of structure and pronunciation.

In terms of the map of the structure of Spanish, there are very few differences between the Latin American and Castilian versions. The biggest difference is that the Latin American map contains the voseo verb forms while the Castilian map does not; and the Castilian map contains the vosotros forms, while the Latin American map only includes these in the table of irregulars. The voseo forms are predominantly used in Argentina, while much of Latin America does not use them at all. The vosotros plural form is not used at all in Latin America, except in some written language and of course in literature from Spain. This is really the most significant difference between the two languages â€” and it is a difference that changes the shape of the verb conjugation tables slightly. Verbs take up approximately half of the area of our maps of Spanish, so it's important to get them right.

If they are so close, why - you might rightly ask - did we create two different versions? While the structures of the two varieties are very close, the differences become more apparent in pronunciation, ritual language, and literary style. Because our maps are simply one component of larger courses, we decided to separate Spanish into two separate courses. The starter module, vocabulary builders, and all audio recordings will be very different in Castilian to those found in the Latin American course.

If you are looking for a complete fluency in Spanish, the structure will be essentially the same everywhere you go. At the same time you will want to expose yourself to pronunciation from across the Spanish-speaking world. British television shows are popular in America and American shows popular in Britain; there is a similar dissemination and cross-pollination of materials in Spanish from across Latin America and Spain. The educated native speaker will be capable of a wide range of accommodation. In learning the language, however, it is usually best to focus in your own production and pronunciation on a specific variety so as not to sound odd in speaking a mixed up version that contains dialectal elements from many different regions.