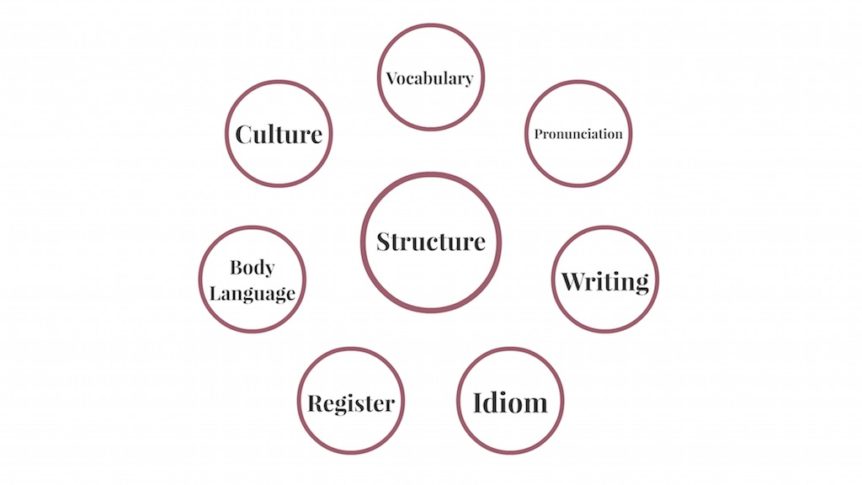 What is a Language? What is Grammar?

A language is a system of solutions to problems of communication.

These problems of communication can be grouped into 8 categories: structure, vocabulary, pronunciation, writing system, idiom, register, body language, and culture.

At the center, we have the structure. This is the most important part, because it represents the underlying rules and patterns that determine how meaning is actually created and shared within a language. The structure is more commonly known as the grammar. Let's have a closer look at what is involved in this portion of a language. What is grammar?

There are twelve main components within the grammar of a language. All languages will ultimately solve these same problems of communication, even if they do not use this same terminology in describing their structures. For example, we start off with nouns. Nouns are the names of things, so all languages will have a way of representing things, even if the term noun is not used conventionally in the grammar.

Within the nouns, or the nominal system of a language, there are several criteria we need to consider. The first is number. This is how a language marks whether there is one of something or more than one of something.

Next, we have gender. Gender is a classification system. We have both semantic and grammatical gender. Semantic gender is based on the actual sex of a thing, whether it is male or female or neuter. Grammatical gender refers to the pattern a noun follows based on that noun's morphology or underlying shape. Most gender in languages is actually grammatical, usually having nothing to do with the sex of the objects in question. Take for example Bantu languages, which can have up to 20 different â€œgendersâ€ and male and female human beings both belong to the same gender. For Bantu languages, many linguists will talk about noun classification instead of gender.

Next we have case, which is how a language marks the function of and relationship between nouns. Is something a subject performing an action, or an object having an action performed on it? Is there motion toward or away from something else? These are the types of functions and relationships marked in the case system.

A declension is a main pattern of noun morphology - in other words, it's a pattern for how nouns change their shape for differences in number, gender, and case.

Within a declension, you might have classes, which are sub-patterns or variations.

We also need to consider the concept of register: how words change for differences in formality. This is particularly important for languages like Japanese, where the noun used may be completely different in formal vs. informal situations.

Finally, we can also consider formation patterns, and how nouns are formed out of other elements, like verbs and adjectives.

All of these components make up the nominal system of a language.

We move on now to articles. Articles are words that specify things and mark what are called â€œstates.â€ First, we have the definite article, which marks a specific and known object. In English, the word â€œtheâ€ is the definite article. Many languages do not have articles, but will still be able to solve this problem of communication and be able to mark something as definite. In Mandarin Chinese, for example, there is no definite article, but the demonstrative pronouns â€œthisâ€ and â€œthatâ€ are often used to perform the same function.

These are the components we need to consider in looking at articles.

Next we have adjectives, which are words used to describe things. As they modify or describe things, there are several of the same criteria we looked at for nouns. We have number, how many of something there are, gender, both semantic and grammatical classification, and case, the function and relationships of things. We also have declensions, the main patterns of adjective morphology, and classes, sub-patterns of adjectives within a declension. We likewise need to consider register - how adjectives change for changes in formality - and formation patterns - how adjectives can be formed out of other elements, like nouns and verbs. In addition to these, we need to consider how the comparative is formed in the language. The comparative is an adjective form that marks when something is more of a quality than something else. For example, bigger, faster, stronger - these are comparatives of big, fast, and strong.

All of these elements must be mastered in order to use the adjectival system of a language fully.

In the next video, we'll continue answering the question, "What is Grammar?" by looking at verbs, adverbs, and pronouns.

Take a Course in Linguistics.